The following post is a bit of a ramble, but I hope it comes across in the right way. If so, you will see my enthusiasm for a fantastic piece of independent publishing. If not I hope you'll forgive my slightly incoherent rambles

In a past career life, I worked as a legal secretary at a firm in Coventry. I didnt much enjoy my time there. In fact, with a few exceptions, my colleagues there conspired to make my life as much of a living hell as possible. One of those exceptions was a guy called Ron. Ron was a guy in his late 50s/early 60s who was very kind to me and had a wicked sense of humor. I think he was surprised when he found out I was a massive fan of some of the older comedy greats (Python, Goon Show etc) as well as things from the 80's and 90s. Being only 19 at the time, I suppose I could see his point. How many 19 year olds do you know that record radio 4?

After a few months swapping cassettes, CD's, VHS tapes and DVDs, he told me about a relative of his partner (her son I believe, although the intervening years of vodka may have skewed this memory), who had started up an independant comedy magazine called Mustard. He brought a few copies in with him one day and I sat at my desk at lunch howling. It was quite easily the funniest thing I had ever read.
At the time, Mustard was a black and white publication, and still is collected, edited and mostly written by a guy called Alex Musson. I can remember reading that magazine for hours, over and over again from cover to cover and laughing.
When I left the law firm it was gutting to say goodbye to Ron and the 2 other people there who I didn't wish death on. I had kind of got it into my head that I would be saying goodbye to Mustard too.
Fast Forward a few months to my job in sales. I heard on the grapevine that Mustard was looking for Ad Sales and I contacted Alex to give him the details of the company that I worked for. I found out that he was looking to relaunch Mustard and wanted some Ad Sales to cover the publication costs.

In my 2 1/2 years in sales, Mustard was the account I enjoyed working on the most, and it is what I am most proud of. Instead of being full of PR and reviews like some others out there, there were funny words, pictures and amazing interviews with comedy legends (Michael Palin, Grahem Linehan, Sam Bain & Jesse Armstrong, Alan Moore, Stewart Lee, Richard Herring, Matt Berry & Rich Fulcher). Think of a British version of The Onion.
Selling advertising space in an independant magazine in a recession is not the easiest job in the world, but I loved it because I was selling something I was passionate about, which in salescan be the main thing.
I urge you to check out this brilliant little mag. You can buy it online here, and keep up to date on Facebook here. It also appears regularly in the Alan Moore publication Dodgem Logic.
I hope what I have written doesn't sound at all sycophantic because that is not the object of the exercise. I would just love for this fantastic publication to be as popular as it deserves to be.
In the mean time; 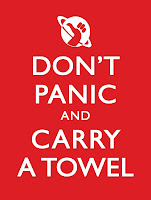 Alexlj
General Musings about General Life. I try to be funny and fail miserably. Say Hi on twitter @alexlj